Koester’s new large chamber piece, “separate, internal, secluded” (ca. 15 min), will be premiered on April 20th, 2018 as part of his Recital in fulfillment of his Master of Composition studies at the Hochschule für Musik und Theater, Hamburg. The concert will take place at 20:00 at the Rudolf Steiner Haus (Mittelweg 11, 20148 Hamburg) with a reception to follow. 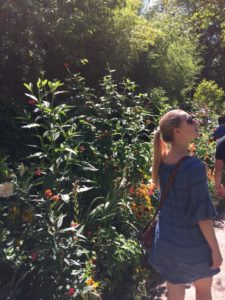 I am happy to announce that my wife, Katie Lynn Koester, will be assuming the role of my manager. In other news, I am also thrilled to say that we are expecting a daughter, Charlotte, in July of 2018.

My most recent piece, “Memory Fragments: Trying to sing,” will be performed and premiered by the Hamburg based Trio Catch during their 2016/17 residency at Hamburg Hochschule für Musik und Theater. I’ve gotten to know this Trio through a series of masterclasses they put on at the Hamburg HfMT, and really understand their local “legend” reputation.

I have been unbelievably lucky to work with violinist, James McFadden-Talbot on my solo violin piece, “partitaTROPE”, which he commissioned me to write early last season. I could not be more happy with the outcome of this collaboration. Throughout the past couple of months he’s performed the piece all around Hamburg… even at his own inaugural “Festival de la Pelicàn” in France. A highlight of my move to Germany has been his performance of my work at the Laieszhalle, realizing a dream that I’ve had for years. James is planning on starting a commissioning project so keep on the lookout for him! Here is a link the performance: http://tristanxkoester.com/listening/partitatrope

I’m also extremely happy to announce that “partitaTROPE” has also been chosen to be performed by the Aeon Music Ensemble in New York City (NYU Steinhardt hall) on September 4th, 2016, as part of their inaugural NoiseGate Festival “Music for a sustainable planet” series.

After using chamber music as a “break” from composition, I’m glad to say that I’ve been performing and playing a lot more cello the past couple months. Thanks to my friends in the Silta Ensemble for really pushing me out of my comfort zone! I’ve received a teaching position at the Musik Atelier Ottensen and will be maintaining a studio of about 10 students in cello and music theory.

I am also working on a large-scale symphonic work (estimated performance May 2017) and a small cello piece for a recording project with Greek cellist Michael Heupel(march 2017)! More details will be shared with the collaborating ensembles once contracts are finalized.

On the morning of July 13th, 2016, I visited the Sankt Petri Church in downtown Hamburg to get some rest. I sat on the pews for more than an hour, astounded and absolutely moved by the raw beauty of the sounds enveloping me. It felt as if this fleeting moment was carefully placed there… as if it was created just for me. Some moments you hear an organ being tuned, others you hear churchgoers taking pictures and meandering about, but the moment you allow for the inherent connotations evoked by each sound to dissolve, you allow yourself to appreciate the beauty lying beneath the unintended.

It felt wrong to take out my phone and press record, to simply rip this moment from its element, but I needed to share at least a fraction of it. This morning has thoroughly changed the way I approach music and my surroundings.

How can beauty like this just exist in the world, unnoticed? If I thought of this 12′.08″ fraction of time as a contemporary composition it would have a logical form.. as if serious compositional thought went into it. I could even consider this to be one of the most moving things I have ever heard, but is this classical music?

There is often a fierce debate here in Germany on the difference between “serious” music or E-Musik (E=Veranstaltungen Ernster Musik) and “conversational” or U-Musik (U= Veranstaltungen von Unterhaltungs-und Tanzmusik). There is a strict categorical difference, one that has led to a famous unnamed composer from Leipzig even telling me that rock & roll is “pure sex, just sex”… not music. These kinds of things often lead me to wonder why I write music in what most people call the classical idiom. By writing notes on paper, am I to upholding or confronting their tradition? If all I have listened to for the past month is music by Arthur Russell or Vince Staples, but then my artistic response (contribution?) is an orchestra piece, is it still classical music?

For me, writing music for the concert stage has become to be a way of listening and approaching sound. This approach has become something like a deal that I have made with the world around me: for the duration of this (classical) concert, I am turning my phone on airplane mode and trying my very best to simply listen to what is happening. If I can’t listen, I don’t go… Each individual is different, but approaching genre distinctions in this manner has truly helped my artistic output.

Art allows us to approach the mysticism of the world, and converse with it. Speaking for composers, we establish a unity between ourselves and time creating a symmetry. But, to evoke Stravinsky:

“music is, by its very nature, essentially powerless to express anything at all, whether a feeling, an attitude of mind, a psychological mood, a phenomenon of nature, etc. Expression has never been an inherent property of music. That is by no means the purpose of its existence.” (Igor Stravinsky (1936). An Autobiography, p. 53-54.)

This field recording is music, because I want it to be. When you emancipate sound from music, you truly begin to listen. 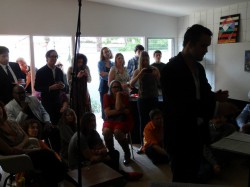 On April April 13th, 2014, architect and artists David Ross and Mark Dutcher hosted a unique salon/party at their home to celebrate Ernst L. Kirchner’s painting, “Bathers at Moritzburg.” Inspired by the work, I composed “Die Badende” as my contribution to this multifaceted  celebration of Kirchner’s works. With an art installation by Danielle McCullough and a reading of new poems by Eve Wood, this art salon was an inspiring and refreshing collaborative event between diverse artistic perspectives.

I would love for these kinds of events need to happen more in the classical world. Out of all of the concerts, festivals, and showcases that I have participated in, the reception of my piece by the art-enthusiasts in attendance was one of the warmest I have ever received-there was an uplifting sense of curiosity and thankfulness that I haven’t experienced in a typical “new music” concert setting.

Historically, chamber music originated in the homes of the aristocracy as a form of entertainment and subsequently moved to the concert stage as it developed. For those to whom it was inaccessible, chamber music became a prohibitive barrier communicating a sense of elitism and power over the less wealthy. Mark and David’s event conveyed the exact opposite sentiment, the doors were open for all to come in and enjoy art and music directly. While conducting the performance of my piece, I felt as if I was returning to my own version of the idealized roots of chamber music. I found a deep sense of artistic satisfaction of composing music away from a stage directly to an audience.

Composing for an event like this was one of the most rewarding artistic endeavors I have had the chance to participate in. It became a way of avoiding the intensity of composition showcases that are often the only performance opportunities that a student composer can partake in. It was also an opportunity to compose and perform for people who wouldn’t normally be able to experience a piece of “classical music” that is only a few weeks old.

My peers and I tend to take the composition of contemporary classical music for granted, but this change of an audience was a way for me to really understand the rare emotive abilities of our craft. I obviously have nothing against composers, but I can’t say there is a more unsettling spectacle than an audience full of composers feverishly analyzing nearly every aspect of your composition as it occurs.

I would like give a special thank you to both David Ross and Mark Dutcher for commissioning my piece and holding this event.